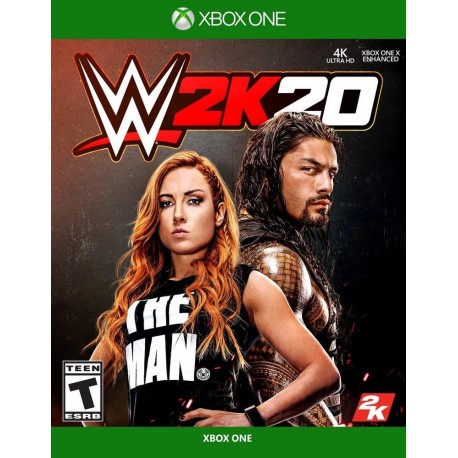 Are you ready to rumble? 2K invites players to Step Inside the ring with WWE 2K20. Everyone will be there, every legend, every superstar in the Hall of Fame will be there to show their strength and celebrate prestige and progress. Join in at this massive event and challenge in the WWE 2K franchise!

Improved controls, realistic moves, and immersive gameplay will keep you engaged in the most wanted combat competition. You will get your ash kicked, but you will learn to kick some ash if you train yourself pretty good and if you exercise every single day. Full contact sports require discipline, training, and dedication, and you can prove you have all that in the WWE 2K20 Xbox Series X|S & Xbox One Game. Discipline is the first requirement and it is also a way of life for sports professionals. If you dedicate your life to sports, then it means that you are ready to dedicate and even sacrifice the small pleasures of life for the greater feeling of being the best and winning championships.

WWE 2K20 also keeps you in the game with a captivating storyline inspired by the Four Horsewomen/Women’s Evolution, the return of 2K Towers, including a story-driven tower based on the career of Roman Reigns an all-new MyCAREER.

The most interesting feature is that you can choose to fight for supremacy between sexes in the Mixed Tag Matches featuring male and female characters. Now is the final challenge where it must be decided whether men or women are strongest. We all know that the gender fight is long discussed and debated. The past proves the supremacy of men but only through the cruel limiting of women's liberty in all forms. At present, women activists are still struggling to put women at the top where they belong, and not only at the top, but they only need to be taken into consideration and not discriminated against.  It can be easily noticed that this not only happens in men dominated industries but also in women-dominated industries, gender equality is mandatory now to give everyone equal opportunities and credit.

So, defend your gender supremacy and fight the fight as you desire and as well as you can train yourself in this amazing WWE 2K20 combat sports game.