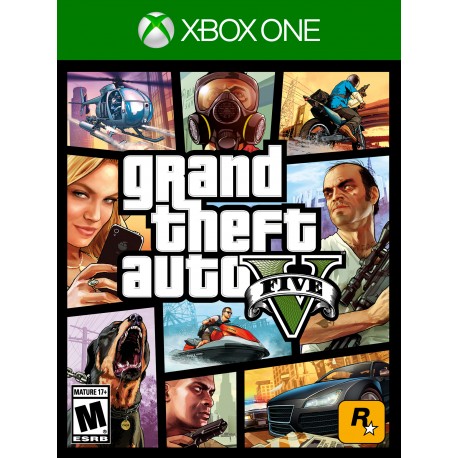 Experience Rockstar Games' critically acclaimed open world game, Grand Theft Auto V. When a young street hustler, a retired bank robber and a terrifying psychopath find themselves entangled with some of the most frightening and deranged elements of the criminal underworld, the U.S. government and the entertainment industry, they must pull off a series of dangerous heists to survive in a ruthless city in which they can trust nobody, least of all each other. Explore the stunning world of Los Santos and Blaine County in the ultimate Grand Theft Auto V experience, featuring a range of technical upgrades and enhancements for new and returning players. In addition to increased draw distances and higher resolution, players can expect a range of additions and improvements including: • New weapons, vehicles and activities • Additional wildlife • Denser traffic • New foliage system • Enhanced damage and weather effects, and much more Grand Theft Auto V also comes with Grand Theft Auto Online, the dynamic and ever-evolving Grand Theft Auto universe with online play now for up to 30 players on Xbox Series X|S & Xbox One One. All existing gameplay upgrades and Rockstar-created content released since the launch of Grand Theft Auto Online is available for the Xbox Series X|S & Xbox One One with much more to come. SPECIAL CONTENT FOR RETURNING PLAYERS Players returning from the Xbox Series X|S & Xbox One 360 version get special access to a host of content on Xbox Series X|S & Xbox One One including rare versions of classic vehicles to collect from across the Grand Theft Auto series such as the Dukes, the Dodo Seaplane and a faster, more maneuverable Blimp; activities including wildlife photography and new shooting range challenges, new weapons and more.