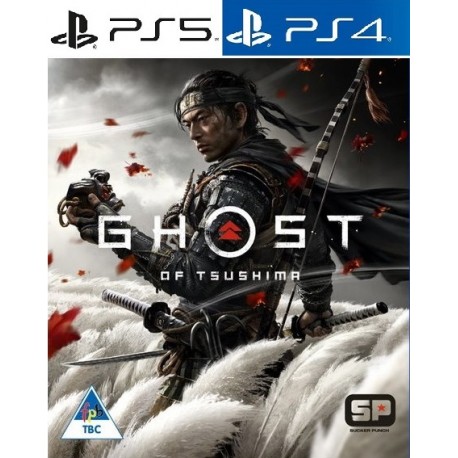 Works on PS5 due to backward compatibility

Ghost of Tsushima is an open-world action-adventure stealth video game developed by Sucker Punch Productions and published by Sony Interactive Entertainment for PlayStation 4 on 17 July 2020. The American developer is well known for the Infamous series of action-adventure games developed for PS3 back in 2009. Ghost of Tsushima features exploration, combat, and stealth, but the open-world is the main strength of this video game. The developers are faithful to their credo that open-world games put the power back in the hands of the players.
Ghost of Tsushima proposes a riveting open-world that derives its inspiration from feudal Japan. The game is set in the year 1274, the year when Mongols invade the island of Tsushima. Players are in control of the character Jin Sakai. He is one of the last samurais and is now facing an arduous task: to defend its home island by Mongols invaders.
Jin is a skilled fighter, but even one as proficient in martial arts as he could not withstand the hordes of Mongols invaders. He needs to make friends, to build alliances in order to withstand the onslaught, but this is not easy at all. The people of the island have their own agenda, and sometime, when they have conflicting interests, Jin will have to fight some of them as well.
Jin is a katana master and he is slicing foes left and right, but the numbers are not on his side, so he has to be patient and intelligent to choose his fights carefully, attacking isolated scouts and small groups of invaders. He has to use many other weapons and offbeat tactics to vanquish the Mongols. Almost always the enemies outnumber him, this is why he prefers stealth and well-prepared attacks and ambushes, an unconventional way of fight, but one that fits the situation best. This is the way of the Ghost – hence the title: “Ghost of Tsushima”.
There are many weapons and tactics in the arsenal of our hero. Using a grappling hook, Jin may scale various structures to approach enemies without being observed. Having the element of surprise is important, as he can activate a time-slowing targeting mode that allows him to slice many enemies in quick succession. He can also use misdirection tactics, for example using firecrackers that will draw the enemies to the noise. A kunai – some multifunctional tool – may be used for striking several foes. Bomb smokes will befuddle the opponents.
The game is very difficult by design. Sucker Punch Production made the decision to make players work hard and stay alert at all times. Players cannot make mistakes, as even an ordinary Mongol soldier may kill Jin, even in the advanced stages of the game when our hero is stronger. Progressing the game, the character will grow and gain new arms and skills. Every small incremental gain will be felt and useful to the players. The enemies will adapt as well and grow in strength to match the players’ power. More important, all enemies remain capable of killing Jin, This leads to a hardcore proposal: an unforgivable game, in which the enemies adapt and match the growing power of the players’ character while progressing the game. Ghost of Tsushima is constantly very difficult.